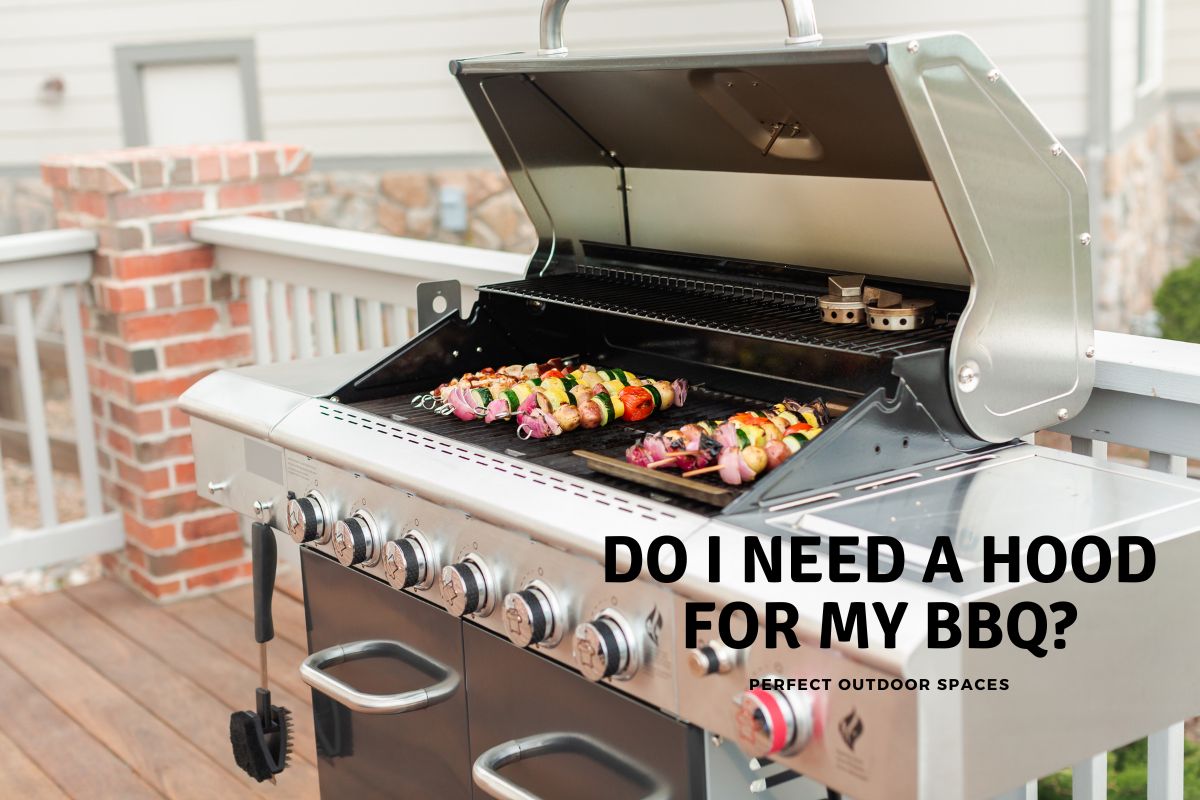 There’s something special about food cooked on a BBQ. From fine dining cuisine to a good old-fashioned family cookout, there’s really nothing that can’t be prepared on a BBQ. Used right, it functions as an oven as well as stove top giving your meals that characteristic smoky flair. If your BBQ is unhooded, you may be curious as to whether you should install one.

Any BBQ or outdoor kitchen installed under a solid ceiling will require a ventilation hood. This includes BBQs under porches, pavilions, or pool-house structures. The only BBQs that do not require a hood are those installed completely outdoors or in a completely open-air or roofless structure.

Whether you’re cooking with wood or coal, your BBQ’s smoke emissions contain various fumes and toxic chemicals. Then there’s the greasy, oily build-up that could accumulate on and around your cooking spaces. Some open-air areas and structures are ok for an unhooded outdoor kitchen setup, though. We’ll look at some of these exceptions below.

When Does My BBQ Need A Hood?

For indoor, semi-indoor, and enclosed spaces, you’ll need a decent range or ventilation hood to maintain and make the most of the BBQ you’ve invested in. This is because BBQ grills produce more smoke and heat than regular gas stoves or indoor ranges.

The more you BBQ, the bigger the problem of grimy build-up could become, but even casual grillers will need a hood in enclosed spaces or solid-roofed pavilions. A hood is especially important in a smaller or semi-enclosed outdoor kitchen zone.

Some people are more sensitive to BBQ smokes and fumes than others. Using a vent hood ensures a pleasant ambiance with fresh air and no sore eyes. Obviously, if any of your BBQ guests have asthma or other lung diseases, a vent hood is utterly essential.

What Are The Harmful Chemicals Released In BBQ Smoke?

BBQ grilling releases potentially toxic contaminants –formaldehyde, carbon dioxide, and carbon monoxide, to name a few. While the residual amounts that we consume on BBQ-cooked food are negligible, the problem with surfaces comes with prolonged regular use, as the grease and smoke residue accumulate over time.

As they accumulate, these contaminants can even spread into other areas of your kitchen and home, causing a sooty grime coating surface, and an unpleasant smell.

As some of these toxins are potentially dangerous to human health, hooding and ventilation are important considerations for any would-be grill master. A good vent hood channels the fumes away from your cooking environment to the outside, where they can safely dissipate in the open air.

When Can You BBQ Without A Hood?

If your BBQ or outdoor cooker is completely outdoors, uncovered, and not too near any structures, doors, or windows, you can generally cook just fine without a hood. Since ventilation is not a problem with these setups, you might simply consider a heat-trapping lid or flame tamer to better control the temperatures in your BBQ cooks.

What Kind Of Hood Do I Need For My BBQ?

You’ll need to consider your needs, the outdoor kitchen site, the number of people you cook for, and other BBQ habits when deciding on a range hood.

Does your BBQ stand against a wall or on an island? Wall-mounted units will need a wall range hood, while self-standing island units can be ventilated with an island range hood.

The next consideration is a balancing act between efficiency, measured in cubic feet per minute (CMF) of air that the vent hood can move, noise, and price.

Balancing Price With Noise And CMFs When Choosing A BBQ Hood

For most medium-sized to large BBQs, you’ll want at least 1200 CMFs of air-moving power. Less power than that may result in a leakage of smoke sufficient to build up oily smoky grime on your outdoor cooking spaces over time. For smaller BBQs, you can generally get away with far fewer CMFs.

The kinds of foods you like to make also play a role. Asian meals and wok stir-frying are thought to emit particularly high levels of the kinds of fumes likely to cause a build-up. If you harbor a penchant for outdoor cooked Asian cuisine (and who doesn’t?), consider a unit with a higher CMF stat.

Although BBQ vent hoods are available in various price ranges, be aware that often the cheaper options come with a drawback of significant noise levels, which can spoil the vibe of an otherwise pleasant sunny BBQ day. Better options generally incorporate sophisticated noise-canceling technology, making them unobtrusive and a joy to work with. But they aren’t cheap.

Also, consider whether you’ll need any additional lighting in your cook area, as some models have LED lights, which is good if you want to optimize for brightness and power consumption, while others sport adjustable halogen lamps – perfect for dialing in the ambiance during your evening cookouts.

Another decision is whether to invest in a ducted or ductless system. Ducted ones need to be connected to a duct that exhausts the BBQ smoke outside, while ductless range hood options filter and recirculate the air.

Ducted is better for most home grillers, but it depends on the site and structure of your outdoor cooking area. If you need to work your duct around some cabinetry, plumbing, or solid walling, you may need to employ a duct elbow, but beware: More than one elbow in your ducting won’t allow the smoke to draw out properly, and the fumes could still accumulate inside the cooking area.

To recap, you will need to use a hood in any enclosed, semi-enclosed, or indoor BBQ. Even if your BBQ sits close to other structures or walls, you’ll most likely want to utilize a range hood to avoid a greasy, foul-smelling black build-up on your surrounding surfaces.

However, if your BBQ is completely uncovered, outdoor, freestanding, and unobstructed, you can safely cook on it on without any range or vent hood. There are various reasons somebody would decide to screen in their outdoor space. Whether they want to expand their living space or create a safe… Decorating with outdoor cushions is a simple way to enhance your area, whether it’s a rooftop, patio, balcony, or planted garden. However, protection in rainy… When it comes to decking, most people know that wood has been the go-to for many years, but that has slowly changed as new and… Installing a deck is one of the most rewarding DIY projects in existence. However, it is not necessarily as easy as it looks. Several considerations… People enjoy being outside in the fresh air and sharing delicious food with family and friends. The best place to do so is in an…